Birds aren’t just beautiful to listen to, but it is used in wonderful ways. Listening to birds singing is considered a great way to relax and be away from all your worries, as it has a calming effect on any person who listens to it, and because over thousands of years, people learned that when the birds sing they are safe.

It also makes the person who becomes distracted while working more focused and less tired. Birds singing is also considered a natural alarm clock that happens at the dawn, being also an excellent way to decrease the stress of a long, busy day, being a good way of being more focused and alert for the students. In the afternoon, you may listen to the bird songs to make you more focused as in this time the blood sugar levels become low. Bird songs are used to relax people and combat low moods in the airports before their flight. Birds singing is also used in crowded places where the noise levels are very high. There are top 13 singing birds in the world

1- Common Nightingale
The common nightingale is considered one of the best singing birds, living in Asia, Europe, Africa, and the Mediterranean migrating to Africa in the winter, and traveling to the north in the spring to breed, singing during the breeding season, having a beautiful song that features rich notes, different sequences, trills, and whistles, being able to sing in the morning and during the night. The common nightingale sings at night loves singing during the night because their sound can travel for long distances in clear form. Its song is considered the most pleasant melodic bird song, is described in many poems, books and operas, consisting of more than 250 variations. The male nightingale sings to attract the female bird. Both female and male nightingales are similar, measured about 5.5: 5.6 inches, having the plain brown plumage, whitish throat, and reddish-brown plumage.

2- Canary
Canary bird is considered one of the best singing birds, having the ability to imitate the sounds that surrounded it, singing in all seasons except the summer season as they shed the features, being named after the canary islands of Spain, being used as pets since the 17th century because of its sweet songs that have a rare type and technique. The canary males sing better than the females, especially the roller and American canary singer breeds, having the ability to learn instrument tones, music tones, and sounds of other birds.

3- Asian Koel
The Asian Koel is considered one the best singing birds in the world, being a member of the cuckoo family, being a parasite bird that lays its eggs in the nests of the other birds, living in India, Bangladesh, Australia, Solomon Islands, and Southeast Asia, singing during the breeding season from March to August, as the male kill bird sings to attract the female bird. The male call has the glossy-bluish color, while the female bird has brown upperparts with white spots, and their underparts are creamy with brown bars.

4-Rose- breasted Grosbeak
Rose-breasted Grosbeak is considered an attractive singing bird, living in the Northeastern United States and Canada, having bright black and white plumage with dark red triangle marking on white breast, being bred in the woodlands and forest of Northeastern United States, migrating to Central and South America during the winter season, searching for food in a flock that consists of a lot of birds. The male Rose-breasted Grosbeak sings from the top branches of the trees, where the female bird sings during incubation and nest building. This singing bird has a decrease in its numbers, because of the forest fragmentation.

5- American Robin
The American Robin bird is considered one of the best singing birds, living in pine forests, mountain regions, shrublands, and woodlands feeding on earthworms, insects, and fruits, known for its striking plumage and beautiful singing that has different whistles, repeating some phrases for three or four times, loving singing at dawn, making alarm calls when they are threatened by potential predators. The American robins male has grey-brown plumage, a blackhead, and orange underparts, while the female bird has a pale color.

6- Song Thrush
Living in Asia, Europe, and Africa, especially in woodlands, suburban garden and parks, traveling for long distances in-between seasons, is known for its beautiful singing, named after their beautiful song, singing from the top branches of trees, repeating some phrases three or four times while singing, measured about 8: 9.5 inches, and weighing about 110 grams.

7- Channel-billed Cuckoo
The channel-billed Cuckoo is considered the largest parasitic bird in the world, living in Eastern Australia, Indonesia, and New Guinea, migrating to Eastern Australia during the spring season, making distinctive arrival calls that can be heard from half a kilometer away, and they return to New Guinea and Indonesia in the winter season, breeding in subtropical regions of Australia. The channel-billed cuckoos lay eggs in the nests of the other birds, taking three or four weeks to get the cuckoo chicks to be in its full shape, then they leave the nest.

8-House Sparrow
House Sparrow is considered one of the best singing birds that are connected with humans, living in most parts of the world, especially in rural and urban areas, feeding on berries, seeds, and insects, protecting the nests that they live in. Its song is considered a way of contacting between the male and the female bird, but the female birds use this song to make soft chattering sound when a male bird comes within its sight, making alarm calls as” quer…. quer…. quer”, while the males’ birds use it to attract the females.

9-Black-billed Magpie
The black-billed magpie is considered a small vocal bird that is found all over the world, known for mimicking the sounds of other birds, being found in flocks that make raucous calls, measured about 18: 24 inches, having black and white-colored body and blue-green markings in the wings, having large wings, but it doesn’t fly long distances.

10-Yellow-tailed Black Cockatoo
Yellow-tailed Black Cockatoo is considered one of the best singing birds in the world, known for their loud calls that can be heard from long distances and help it while flying to connect with the other yellow-tailed black cockatoos that become soft calls while searching for food, and harsh alarm calls when get threatened, having a distinctive yellow patch on its tail and striking black plumage, living in southeastern Australia, especially in the woodlands.

11- Budgerigar
The Budgerigar bird is considered one of the best singing birds in the world, being a member of the parrot family that is found in Australia, being one of the most popular pets in the world, being excellent at mimicry, being able to learn a lot of words, having other names as: shell parrot, warbling grass parakeet, canary parrot, zebra parrot, flight bird, scallop parrot, common pet parakeet, measured about 18 cm, weighing about 30: 40 g, living in Australia in the open woodlands, scrublands, and grasslands, feeding on grains, seeds, and insects, having black markings on its wings and back covers, having three black spots near the throat. Its tail is dark blue and the outermost tail feathers are yellow, and its legs are bluish-grey, living for about 5: 8 years.

12-Tanager
Tanager bird is considered one of the best singing birds in the world, living in South America and the Andes, living in small groups that consist of about three to five birds. Many tanagers have dull songs and the others are elaborate, feeding on fruits, seeds, nectar, flower parts, and insects, building cup nests on branches in trees. The female tanager incubates the eggs and builds the nest, but the male tanager feeds the female while incubating. Tanagers are often brightly colored, while some species are black and white. Their breeding season is March through June in temperate areas, and in September through October in South America.

13-Baltimore Oriole
Baltimore Oriole is considered one of the best singing birds in the world that sings a loud flute whistle, with a buzzy, bold quality, a familiar sound. Its male sings from the tree canopy, giving away its location before being sighted, breeding in the summer while the males sing to females while hopping from branch to another in front of them, migrating to Mexico in the winter, feeding on insects, berries, and nectar. The female bird builds its nest using plants or animal materials, laying on the eggs for 12: 14 days.

All companion birds are considered sensitive creatures that are exposed to many illnesses, so your bird should visit the vet regularly for a well-bird checkup. Not all vets are qualified to work on birds, so you should choose the vet who specializes in birds. You should visit the office of the vet before bringing your bird to make sure that it is clean. During the well-bird checkup, your bird will be weighed and the vet will do a blood test for your bird for a variety of bacteria and viruses, and he will groom your bird, besides trimming its nails. There are many signs of birds illness as the change in demeanor, sleeping too much, discharge from the nares, tail bobbing, vomiting, lack of upkeep, and being picked on by cage mates. 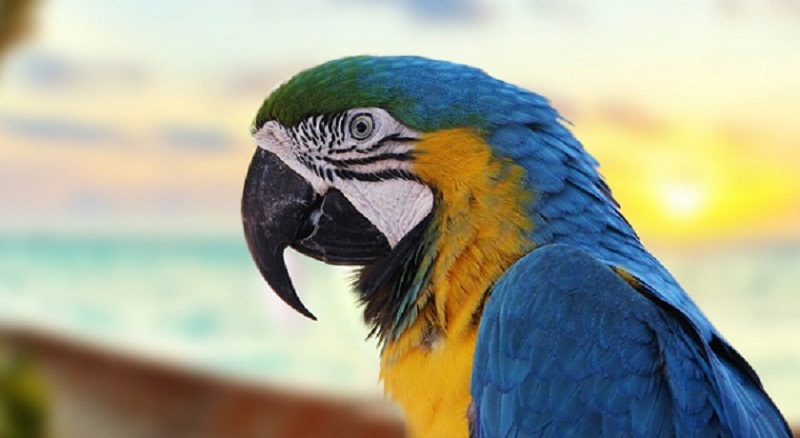 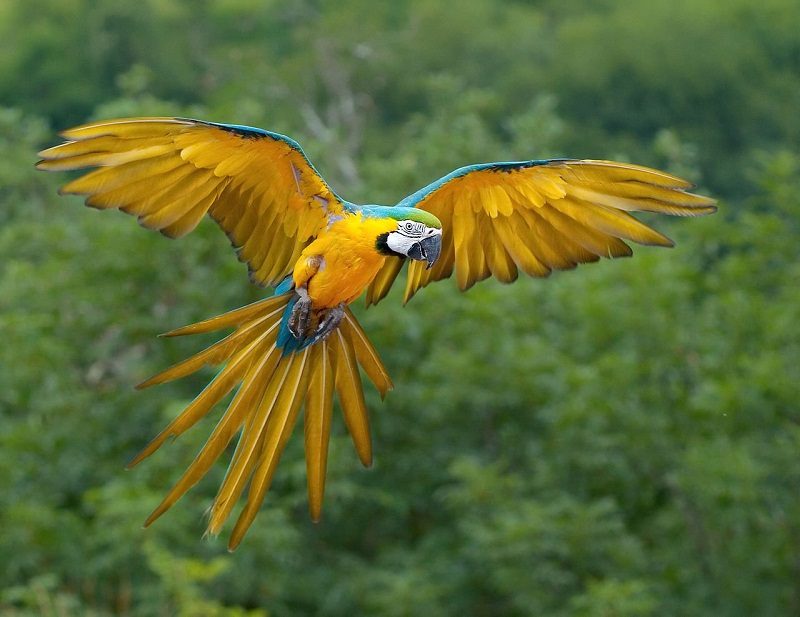 Want To Know More About Parrots? Read This! 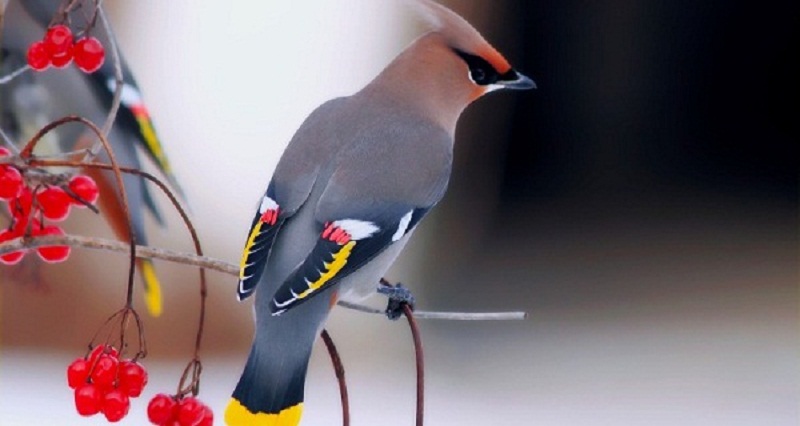 Top 13 Pretty Birds In The World